A field trip can be one the funniest and exciting parts of learning.  Whether at some educational institution, like a museum, or the great outdoors, field trips offer students a chance to put their knowledge to the test outside of the classroom.  Recently, the kindergarten class took a trip to the local mountain, where there is a petting zoo and play area overlooking the city.  They were excited the moment they arrived at school.  While they tried to be patient before we left, several of them still asked every once in a while, “Are we going?” 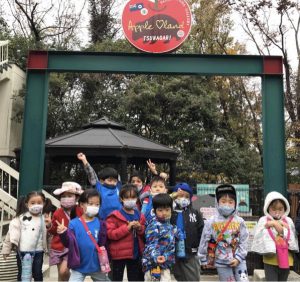 Our trip began on the bus.  The children were excitedly chattering away to each other.  When we arrived at the zoo, our group gathered together and took a quick picture in front of the colorful gate.  It took a little time, but we, eventually, got the pictures we wanted and set off to see the animals!  Immediately, we saw some llamas and ostriches.  The animals were a little social that day and came close enough to the fences that the kids could see them pretty clearly.  We walked for a little ways to a fenced off area.  Within was a handful of rabbits, hamsters,  and guinea pigs.  The children carefully tried to pet the rabbits, though, the rabbits didn’t always stay where they wanted them to be.  They would gather around a calmer rabbit and gently pet them, all the while talking like they were in awe and saying how cute the animals were.

Eventually, we had to leave, and we cleaned our hands and made our way over to see the big, fluffy sheep.  They were also very social and almost climbed onto the fence!  Afterwards, we made our way to the park area.  The children were tasked with finding as many leaves and acorns that they liked and placing them in some plastic bags that they were given.  It seemed that picking up and throwing the leaves in the air was more entertaining.  It also led to some cute pictures!  We walked around enjoying the beauty of nature, and then we headed back to school for the sake of time.  By the end, everyone was a little tired, but still very talkative. 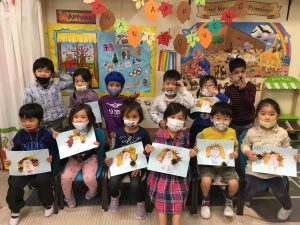 In America, during the time that we went to Satsukiyama Gallery, as it’s called, is a national holiday called Thanksgiving.  Amongst other things, one of the biggest reasons for Christians to celebrate this holiday is as its name suggests – to give thanks to God for all that He has done in our lives and the lives of His people.  Before the trip, the students learned about this holiday and shared some things and people for which and whom they were thankful.  Another thing they learned was that it is popular to eat turkey at this time , so the children were able to use leaves that were collected to make a craft.  They colored a cutout of a turkey’s body shape and used the leaves that were collected to make the tail-feathers of the turkey.  They enjoyed it and did a wonderful job!