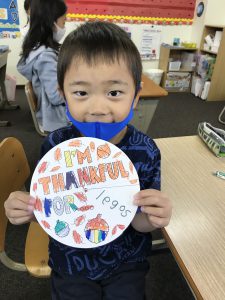 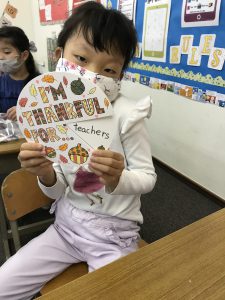 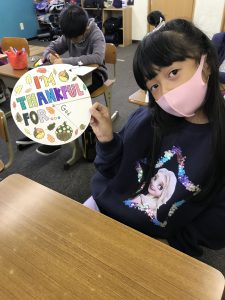 What are you thankful for? It’s an easy question to ask, but it is not always easy to answer. It is especially hard to answer when we are going through a tough time or things are not happening the way we want. In the season of Fall, we were thinking of this question because of the American holiday – Thanksgiving. It is a day where we eat a lot of food and think about what we have that we should be thankful for. In our Bible lessons we were learning about David. He had a lot of good things happen to him, but he also had difficult times. We talked about how David’s response to his circumstances was thankfulness for what God had done in the past. When we have a thankful attitude it causes us to think positively about what is good and we begin to have a better attitude. For first and second graders in Japan who have not experienced Thanksgiving or have no context for this question, it is a new concept.

The students enjoyed coloring and putting together their “thankfulness wheels”. For this craft they chose six things and wrote them down. When students spin the wheel it shows the different things they are thankful for. In this class time I started to ask the students what they were thankful for. At the beginning, students were being shy and did not know what to say. Then I started giving them examples: God, friends, family, etc. And a few students started answering with: mom, dad, school, house, car. Then I began to say some funny ideas like: Christmas, pizza, TV, toys. At these ideas the room erupted with students joyfully shouting their favorite things and foods. We wrote as many of the ideas on the whiteboard as we could. By the end of class time it was very full with things such as: teachers, pets, hamburgers, video games, iphones, vegetables, fruits, nintendo switch, ramen, toys, etc.  This not only changed their attitudes but it changed the atmosphere of the classroom. The students were having so much fun saying their ideas. When someone said another idea the class would start laughing or say they liked that too. We learned the power of thankfulness in our classroom that morning.