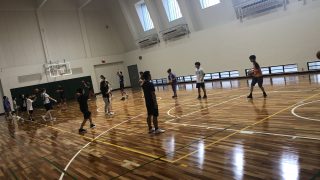 The second semester has started, and with a new semester, club activities also resume. For most of this year we have been unable to use our regular gym due to renovations intended for the 2020 Olympics.

Our gym was nice, but it needed some updating for sure. While these renovations were underway, we had to move basketball club to a different gym in a neighboring city. It was a bit far, but we still had fun.

Now, the renovations are complete and we have returned to our original gym. Due to the COVID-19 situation, the Olympics were postponed until next year. Whether they will actually take place remains to be seen. If some Olympic team needs to use the gym, perhaps we will have to relocate once again. But no matter where we go, the students have fun in our basketball club. The renovations at the gym are great. Everything is new and clean. The floor looks nice, as do the new goals. It feels like a completely new gym.

Recently some of our alumni who study now in America had returned to Japan for their summer break. Their break in America is quite long, but for us here in Japan, we can enjoy meeting them many times while they are here. The alumni often participated in basketball club. Most of them were members of the club when they were students at our school. In America, they also play on the basketball team at their high school. When they returned to our club, we could see how much they improved in skill and ability both in basketball and in English. They helped coach the current and new members of our club.

In basketball club, we do a variety of activities. After stretching and warm-ups, we will split into two groups consisting of elementary and junior high students respectively. However, since the alumni from America had been visiting, we did many activities together. All students from elementary to high school were divided into four teams and played each other in a small tournament. It was exciting. Special rules were created for the younger students so it would be easier for them to score points for their team. For example, some students only had to hit the backboard or the rim of the goal to get a point. These rules balanced the game for them and gave them more chances to help their team.