This year we put on a Christmas program like no other in our school’s history.  We held a variety show. 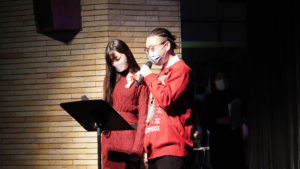 Our variety show was hosted by two of our ninth grade students who introduced each act in English.  Some sixth grade students also helped out by narrating several scenes that different grades performed. Many grades worked together to create an act for the show.  Each grade did something very different from the other grades as well. 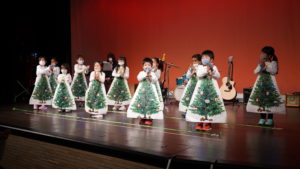 Our program began with some super cute Christmas trees.  The kindergarten students were dressed head to toe as Christmas trees that actually lit up.  They sang and danced to several songs. 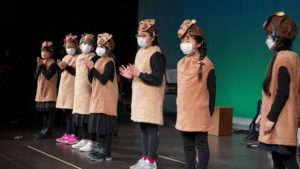 The third and fourth grades also sang and danced to Christmas songs.  The third grade students portrayed a group of fashionable camels from the Holy Land.  The students acted out a scene where a wiseman shows them a great star and tells them about a special baby being born.  The sassy camels agree to assist the wisemen on the journey to find this baby. 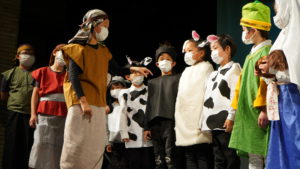 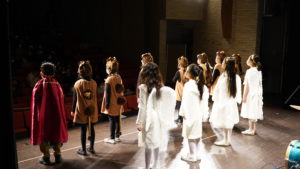 The fourth and fifth grade girls were the angelic heavenly host announcing the birth of the Messiah. 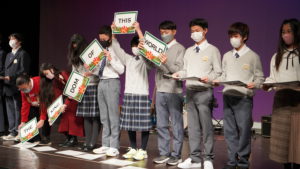 As part of the celebration the junior high students and sixth grade students gave a unique kind of dance as they performed a choreographed display set to to Handel’s song, “Hallelujah Chorus”. 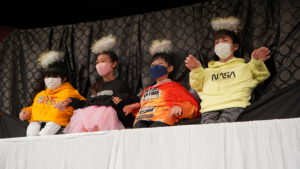 Continuing with the celebration The sixth and seventh graders danced to a compilation of famous English and Japanese fun songs as the Mini Merry Minstrels. They had to work as pairs with one person showing their face and using their hands as feet, while their partner was mostly hidden but showing their hands and arms.  Together a pair made up a whole Mini Merry Minstrel.  This performance was a real crowd pleaser, and so much fun to create too. 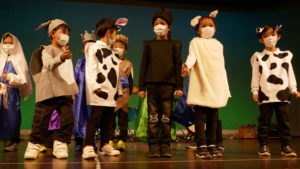 Next up, was the first and second grade classes.  This group recreated the Nativity scene and quoted Isaiah 9:6.  They continued their wonderful performance with a song. 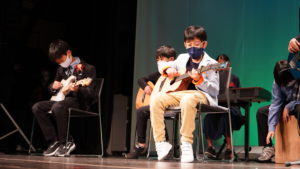 The school’s Praise Band Club had two groupings perform.  The first group had students who were learning new instruments this year.  They really were fast learners and gave a great performance.

The second band were the more seasoned group who performed and then brought everyone back to the stage for a final song.  In the finale, all students returned to a darkened stage. Then began waving glow sticks as everyone sang “Light of the World” together.  The students enjoyed literally lighting up the stage in the final performance.  Although there were so many kinds of performances this year, each act showcased our students’ many and various talents.  These acts were performed as a gift to their family and friends, and as a gift to celebrate Jesus’ birth. 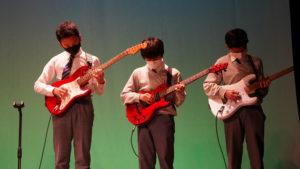 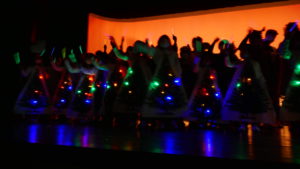 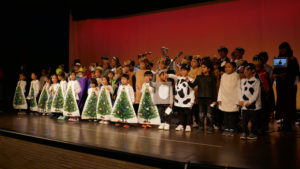