Will it Float or Sink?

Experiments are always a fun way to show how God made things to work in nature.  It is also exciting to see situations from the Bible come to life for the students.  Recently, the kindergarten class did two experiments that they really enjoyed.  They connected to a Bible story they had previously learned.

The children learned about Noah, the man who God entrusted to build an ark. After a great flood came upon the earth, the big and heavy ark was able to float on the water; though, there were many different kinds of animals on board.  Our experiment was to learn what kinds of things are able to float or just sink when placed into water. 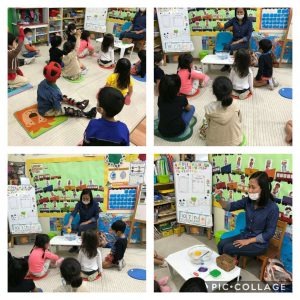 We put normal tap water into a big, clear bowl.  The children made predictions as to whether each small thing we were going to put into the water would sink or float.  We dropped a coin, a needle, a rock, a paper clip, and a marble into the bowl.  All of these sunk down into water.  It amazed the kids that even a thin needle would be able to sink.  Though each item was small, they were still heavier than the water. While the leaf, rubber boat toy, straw, paper, pencil, and pen all floated.

Recently, the kindergarten class also explored many facts about the country, Israel.  We talked about the Dead Sea, which is a very famous place there, as well as world-wide. One of the interesting facts about the Dead Sea is that it’s not a sea but a saltwater lake! Yes, it is almost nine times as salty as the ocean. That makes it impossible for most life forms to exist in it. This is the reason for its name. However, it is not completely dead, because some types of bacteria are able to live in the water.  Since the water is so salty, it weighs more than fresh water. That is what makes people float there without any effort. Tourists come from around the world to float and bathe in the water.

In our experiment we put water in a big bowl, added about a half-cup of salt, and mixed it, until it dissolved. Once it was ready, the students gave their predictions as to whether each object would float or sink.  We then dropped small objects into the water.  The following is the result of our fun experiment.