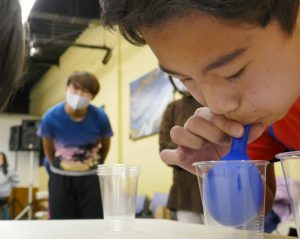 During camp the third through ninth grade students were divided into six mixed groups.  Three groups played for the Blue team and three groups played for the Yellow team. In a way this was a continued rivalry from Sports Day.   Each team was able to earn points from morning icebreakers, handball, and quick crazy games.
There were various games where opponents played one on one. As a student won a round, a point was earned for their team. The games consisted of various timed skill sets. One included being the first to stack cups and plates the fastest in a certain configuration. Another involved using only a partly blown balloon in one’s mouth to pick up cups in order to stack them the fastest. These are just a couple of examples of the many mini competitions. In the end the score was close and the final game of pass the balloon gave the Blue team a lead. However the competition was not over just yet. The teams would go on to play handball at the gym to determine the overall winning team.
In the end it wasn’t so much about winning, but having a fun day with classmates. Students from different grades worked and played together. Relationships were strengthened as well. We like to promote a family atmosphere at our school. We encourage older students to be good examples to younger students. We encourage every student to show care for others. This camp was a great opportunity for all the students to bond and support each other. It was a lot of fun too!